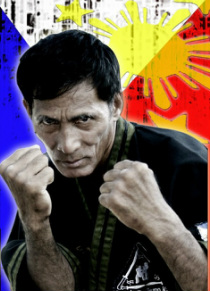 ﻿Punong Guro Henry Espera﻿
Grandmaster, 10th degree
Founder, Rapido Realismo Kali International
Henry Espera, Punong Guro at Nagtatag ( Grandmaster and Founder) of Rapido Realismo Kali International was born in Barrio Tagdon, Barcelona, Sorsogon, Bicol Region, Philippines on December 1, 1953. He is the fourth of thirteen children to the couple Ramon Espera and Encarnacion Evasco. Being the Grandmaster of his own fighting system he is an Innovator, Leader, and a Humble teacher who is known to be a loving and caring person not only to his students, friends, and family but as to others as well. He prefers to keep a low profile but who has an immense passion for teaching and sharing his knowledge and wisdom to anyone who is willing to learn his system of martial arts.

Mang Henry as he is fondly called, believes in the Filipino traditions of ranking and bestowing of titles. In Filipino culture, the only way one can proclaim that he or she is a master of FMA is by letting other masters proclaim you as a master as manifested your skills, knowledge, and wisdom. Traditional masters of old does not adhere to a formal Ranking system but rather rely on their skills and knowledge progression through training and actual matches. Mang Henry is belongs to the generation of traditional masters and was recognized as Instructor/master not only by his three mentors but also by other FMA masters and is considered as an expert both in weaponry and empty hand.

Grandmaster Henry Espera owes his brand of Filipino martial arts from his great mentors : Grandmaster Antonio Ilustrisimo of Kali Ilustrisimo, Master Andrew " Andy " Abrian of Orabes Heneral Eskrima, and Master Juan of Automatic Arnis. He developed his martial art from the best of these systems and always holds the greatest respect to the said Masters and their respective systems.

Integrating Kali empty hand movements, Boxing (Suntukan), Trapping (Tapik-Patibungan), Kicking (Sipaan), Grappling and Wrestling (Buno) with his own style of tactical footwork, he developed Rapido Realismo Kali International. RRK practitioners are known for their aggressive footwork - feet are tactically placed into position during combat, blocking the opponent's sectors, placing the RRK practitioner in a superior position and angle, allowing them to dominate battle.
Powered by